Upcoming Boston Exhibit Will Be Mesmerizing

A Wind Sculpture Exhibit opening this spring has Boston buzzing in anticipation of this incredible exhibit that will coincide with the Mayflower 2020 festivities. The photos below show two of several sites where Wind Sculptures will be installed. 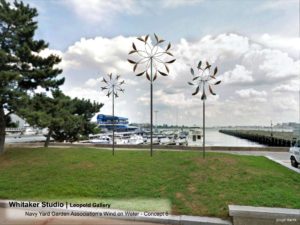 The Boston Arts Commission and the Boston Planning Agency have given approval to the Charlestown Navy Yard Garden Association to place the kinetic works by Lyman Whitaker in Shipyard Park, as well as along the Harbor this spring.

“We’ve been working on this for two years,” said Hallie Pinta. “These pieces are amazing, and when we asked the community for support, it was fantastic to see the patients and caregivers so excited to see Whitaker Wind Spinners in the Navy Yard. We knew it was going to be fun for everyone, but to get support from the Spaulding, Mass General and Ronald McDonald House was a dream come true.”

The opening for the installation will be on May 7th, unfolding at the same time as the Mayflower festivities. This exhibit, by world-famous kinetic artist Lyman Whitaker, will be up for one year–or until May of 2021. There will be thirty-one sculptures at nine locations, some of them as tall as 16 feet and all of revolving with the wind.

“We heard loud and clear that this is very much wanted,” Pinta said. “We decided that if we were to do this, we had to do it right, and are lucky that we’re lining up with the Mayflower event.” 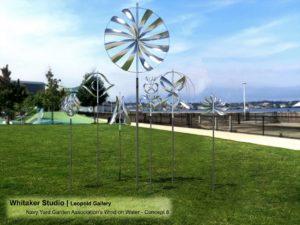 Paul Dorrell, President and Founder of Leopold Gallery in Kansas City, represents Lyman Whitaker. Dorrell said the 77-year-old artist–based in Springdale, Utah near Zion National Park – is as surprised by his success as anyone.

“Lyman was living in a teepee near Zion years ago, and wasn’t expecting a success,” said Dorrell. “Like any artist, he hoped his sculptures would take off but wasn’t counting on it. Then he fabricated his first Wind Sculpture in 1987 and that was a big success, so much so that he had to hire skilled assistants, get a studio and find a manager. It was a lot of stuff at first, but as always he managed it smoothly.”

Dorrell said the sculptures will be on the waterfront for the first time publicly in the Navy Yard show. While they are in some private collections in Boston, there’s never been a public exhibit of Lyman Whitaker’s work on the harbor. That, he said, will contribute to their mesmerizing nature.

“They’ve been displayed at botanical gardens in Dallas, Philadelphia, Kansas City and Pittsburgh, and the level of fascination was great,” he said. “It will be the same in Boston. The pieces are soothing, mesmerizing, and kind of trippy.”

Mesmerizing and soothing is what Lyman had in mind when he started in the `80s. Some of the designs that will be on display include the Double Spinner, Wave, Twister Oval, Double Helix Sail, Tulip, Single Helix Oval, and Agave.

From what we can tell, the City of Boston is looking forward to this exhibit with great anticipation and to working with both Lyman Whitaker and Leopold Gallery. As Dorrell said, it will certainly be “mesmerizing and trippy,” fascinating viewers throughout 2020 and into 2021.

Thanks for signing up!